The Power Point is a place where large amounts of positive charges are accumulated, having an advantageous effect on our bodies. Humans experience this as a kind of delicate vibration. When exposed to this effect, sensitive people are lively, rest faster and experience stronger contact with nature. The power point in the compartment No. 495 was discovered by accident in January 1993 by three Białowieża citizens: Sergiusz Tarasiewicz, Borys Rusko, and Piotr Bajko, who were searching for a small monument commemorating a death of a worker repairing the nearby railway tract Hajnówka-Białowieża. The tract was destroyed by Germans in 1944. The explorers were charmed by positive feelings they experienced at that location.
In the spring of 1994 the wilderness was examined by a famous dowser and geomancer Leszek Matela. He classified the discovery as a so-called power point. The radiation noted here is significantly higher than in its surroundings.

In September 1994, a dowser and bioenergotherapist, Andrzej Ciupek, confirmed the results of the previous findings. He classified the wilderness as a place having an effect stronger than Jasna Góra previously examined by him, as well as its Orthodox equivalent, the Holy Mountain of Grabarka.

It is assumed that it was a spot of Pagan cult, and this may be proved by a precisely arranged stone circle. A legend, now almost forgotten, says that in ancient days there was a hidden place in the Forest where wise men gathered to use their own power and power of the stones to stop enemies approaching settlements hidden in the Forest.

Trees growing on that spot are also very mysterious and interesting. Their form is not typical for dense forest. They do not have one main trunk, but several smaller ones. There are many fused oaks here. Branches of hawthorn bushes point towards the ground. It looks like there is some great force pulling them strongly downwards. This effect is visible not only in old but also in younger trees.

Area description:
The glade is located in the Białowieża Forest District in the compartment 495, about 0.5 km away from Białowieża. A 4 km trail leads to the power point. Nearby there is a car park and an unused railway track. In the season, handcars ride along it. 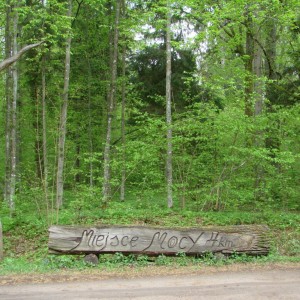 Singpost to The Power Point 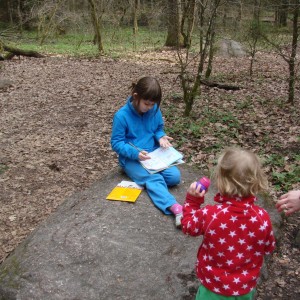 In The Power Point