The Royal Oaks Trail is an education trail located in Stara Białowieża wilderness. It is assumed that it is here, on Łutownia river, where the first settlement was built. Those assumptions were confirmed by archaeological findings.

In summer of 2005, remains of ceramic vessels, pot tiles (named after their shape), foundations of an oven and fired clay were found in roots of the August III Sas oak overturned by strong wind. These were remains of a hunting lodge from the second half of 16th century, possibly associated with a mansion of King Sigismund I of Poland. In the lower layer of the excavations, traces of a Slavic settlement from early Middle Ages (possibly of 9th or 10th century) were found. This was an evidence that Białowieża was located here for the first two hundred years of its existence. Later the settlement was moved because it was located on wetlands.

Shapes of oak and their distribution in groups along the trail also point towards human interference. Relatively low trees of ca. 32 metres are nearly 10 m lower than the oaks that have always grown in a dense stand. This implies that they were planted by humans, in a park surrounding a mansion located here in the past. One of the legends suggests that their planting was ordered by King Sigismund I of Poland.

A wooden gangway is installed on the trail, and provided with boards describing oaks, named after Polish and Lithuanian rulers who ruled the Forest. Walking along this path is an opportunity for a contact with nature and to expand our historical knowledge. An author and initiator of this concept was Jacek Wysmułek, a forester at Białowieża Forest District, who already in 1976 proposed to protect the whole wilderness, and to create a historical education path here.

The gangway is adapted to the needs of disabled people using wheelchairs and is provided with additional braille display boards. A road between Białowieża and Narewka village runs along the trial. This is also a road to Siemianówka Reservoir.
Remains of the ruined foundations of the other hunting lodge, possibly constructed by Grand

Duke Gediminas, is located about 1.5 km north from this site (in the compartment 281 – yellow tourist trail). 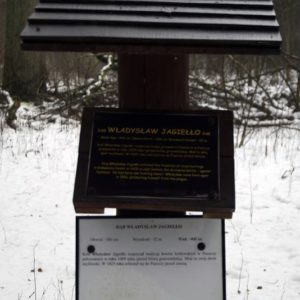 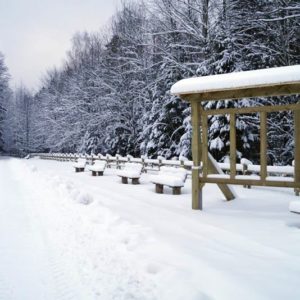 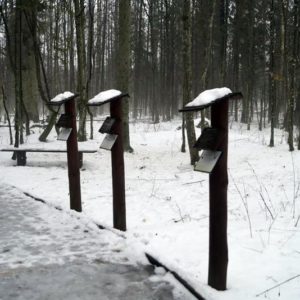 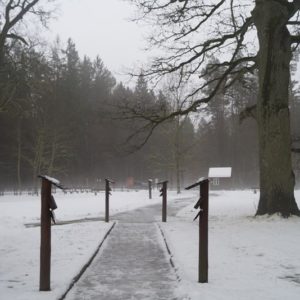