Catholics in Białowieża were decimated by Russian authorities after the November Uprising, which was joined by forest guards. When the church in Narewka was converted to the Orthodox Church in 1866, Białowieża was added to the parish in Szereszewo. Only when Poland regained its independence, it was possible to create a parish in Białowieża. The first priest (from 1924) and organiser of the parish was Father Józef Dowgiłło. First, masses were celebrated in a chapel organised in the former Tsar palace. In 1927 a construction of a church in the Polish Renaissance revival style began, to the design prepared by Borys Zinserling from Warsaw. The church was consecrated on October 15, 1934 by Metropolitan Archbishop of Vilnus, Romuald Jałbrzykowski. It was still unfinished and there were no money for further works. Only from 1970s the finishing and refurbishment works were conducted. At that times many root-carved items were added. In 2007 a 17-voice organ from Nuremberg was installed in the church.

An article prepared by PTTK Białowieża. 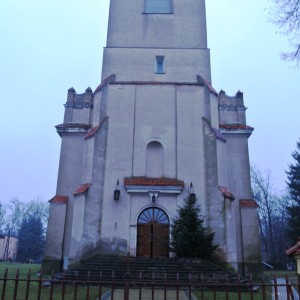