The cemetery, explored in 1918 and 2014 and containing cremation graves from the 7th–9th century, is located on the east bank of the river Łutownia. It is formed by 41 mounds, often surrounded by shallow ditches. Remains of dead people were scattered on the top of mounds, which frequently also covered the burned wooden structure. The graves were only furnished with small fragments of clay vessels found in the mounds. The cemetery was established on a site of an older settlement, dating possibly from the 4th to 6th century AD. 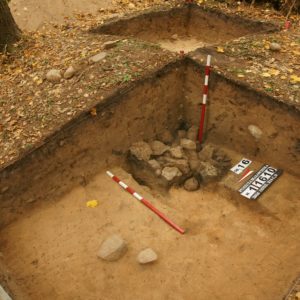 The hearth of the III-IV. found under one of the mounds, photo by Dariusz Krasnodębski
Go up